This is the second half of my interview of author Julie H. Ferguson:

How much time do you spend writing as opposed to marketing?
At the moment, 20% writing and 80% promotion. But that is the way it goes.
Usually I write more than 50% of the time, and much of that is now articles not books.

What were your personal connections to submarines and the navy generally?
In 1979, as a naval reserve officer, I was taken on a tour of HMCS Okanagan as part of my orientation. I fell in love with submarines and Okanagan’s CO at first sight. Soon after we were married I asked him over a bottle of Chianti what books had been written about the Canadian submarine service and he said, “None as far as I know.”
With the bravado of wine, I said, “Well, I shall write one!”
If I’d known it would take eleven years from concept to launch, I would never have had the guts to start it.

What other books that you have written are you particularly pleased with?
All of them — two on submarine history that we’ve already discussed; one about bishops of BC, Sing a New Song: Portraits of Canada’s Crusading Bishops; and one about the fur trade, James Douglas: Father of British Columbia, which is a young adult biography that reads as an adventure story. All are Dundurn books. The last one was researched, written, and revised in under four months, which I didn’t think I could achieve and was thrilled it came out as well as it did.
My bestselling book is Book Magic: Turning Writers into Published Authors, one of my six self-published books for Canadian writers.
I have also self-published eight photo portfolios, but they are an ego thing!!
All this makes me a successful hybrid author, both self- and traditionally published; the blend improves my revenue.

What is your routine for writing—a particular place, or time of day?
Deadlines drive my writing, always have. I write like a fiend until a project is finished and then take a vacation! Not like many colleagues who prefer a writing routine of a set time and place.
I like peace and quiet to write with no distractions so I can get into “the zone” quickly and stay there. I do listen to baroque music as I write and have a small fountain in my study. When I’m stuck, I go for a walk and think it through. Always works for me, and has recently been proven by research at Stanford University.

If you were to give one piece of advice to new or emerging writers, what would it be?
Engage in your writing community. Take advice from published authors about good critique groups, workshops and conferences to attend, and use a good professional freelance editor who will teach you bucket-loads about craft.

Do you have a project you are working on that you can tell us about?
I will be away on travel writing assignments until the beginning of October, so I’m researching those destinations at present. Additionally, I am writing and illustrating some presentations for the submarine centenary. No more books on the horizon, but I do have a mid-grade novel series underway with the first book in the can — I have yet to pitch it.

Julie Ferguson blogs at http://beaconlit.blogspot.com and is on Facebook, www.facebook.com/beaconliteraryservices. Her books are available on Amazon.ca.

Part 1 of the interview is in an earlier blog post.

I knew from your Facebook postings that Julie Ferguson was interesting but what a great story! Good interview questions...no time wasted on inconsequential details.

Thank you for your kind words, Lamont.

"No time wasted." I think that could be Julie's motto, as well!

TERROR ON THE ALERT 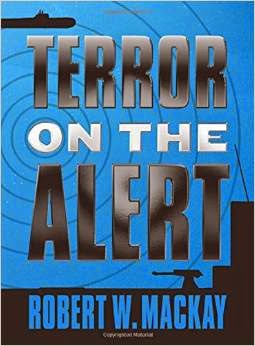 Buy Terror on the Alert on Amazon

SOLDIER OF THE HORSE 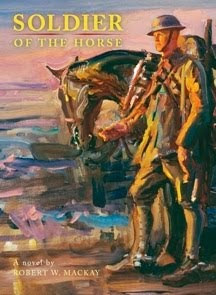 Buy Soldier of the Horse on Amazon

Robert Mackay
I attended UBC, and spent ten years in the Canadian navy with service in destroyers and submarines, subsequently teaching school and practising law. My second novel, Terror on the Alert, is a thriller set in a Canadian submarine during the Cuban Missile Crisis of 1962. It was launched in September 2014, and is available in book stores and as an ebook. I’m happy to say there are some great reviews out there!

My first novel is IPPY gold-medal-winning Soldier of the Horse, the story of my father’s time in the WW I Canadian Cavalry Brigade. Please contact me for a signed copy of either or both.